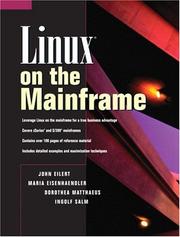 Linux on the Mainframe by John Eilert

This book adopts a cookbook format that provides a concise, repeatable set of procedures for installing and configuring z/VM in a logical partition (LPAR) and then installing and customizing Linux. You need an IBM System z LPAR with the associated resources, z/VM V media, and a Linux distribution. Linux on IBM Z (or Linux on Z for short, and previously Linux on z Systems) is the collective term for the Linux operating system compiled to run on IBM mainframes, especially IBM Z and IBM LinuxONE servers. Similar terms which imply the same meaning are Linux on zEnterprise, Linux on zSeries, Linux/, Linux/x, etc. The terms zLinux or z/Linux are also sometimes used, . On the Linux on Z side, ADE, announced in , is used to detect "anomalous time slices and messages in Linux logs" so that they can be analyzed alongside other mainframe logs. In , the z14 was released, and LinuxONE Rockhopper II and Emperor II were introduced. Besides COBOL, this book presents the IBM products that every mainframe programmer needs to know including TSO, ISPF, OS/ JCL, VSAM Access Method Services, CICS, and DB2. Murach's CICS for the COBOL Programmer Paperback by Raul Menendez (Author), Doug Lowe (Author) On Amazon Join the more than , programmers who have learned CICS using.